Hello, fellow pop culture junkies. I found out some really cool news over Spring Break. One of my favorite TV shows of all time will be resurrected as a film. 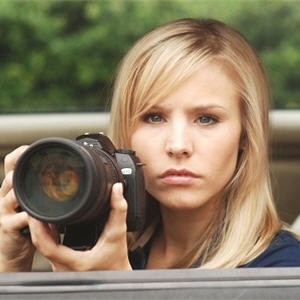 Veronica Mars ran for three seasons and chronicled the adventures of Veronica, played by actress Kristen Bell. At first glance, Veronica seems to be a normal high school girl, but as the daughter of the former sheriff turned private investigator of the fictional town of Neptune, California. She is anything but normal. Veronica herself is a private investigator and a pretty good one. Every season, in addition to the episode-by-episode mysteries Veronica solved, there was a large overarching mystery for her to solve.The first season, she was determined to solve the death of her best friend, Lilly Kane. The second season, she spent the entire season trying to find out who caused a bus crash that killed a bunch of her classmates. During the third season, the format was changed and there were shorter story arcs, but the show never lost its charm.

Everything from the acting to the writing made the show superb. And while it never had earth-shattering ratings, it was a critical darling.

The CW cancelled Veronica Mars back in 2007 and for years, the creator of the show, Rob Thomas, and lead actress Bell, have been trying to get a movie made. Warner Brothers and Thomas finally came to an agreement. If Thomas could raise $2 million for the film’s budget using the fundraising site KickStarter, they would make the movie and pay for the cost of marketing and distribution. They gave Thomas the entire month of March to raise the funds.

In less than five hours, 55,000 people had pledged to donate the money for the film’s budget, and when it was all said and done, the film had a total of $3.6 million in donations.

Now, as you might guess, with that type of budget, we’re talking a very low budget, limited release, indie style movie. But for fans like me, that’s enough. The show had a huge impact on its fans, I know that it definitely had one on me.

My advice is to get on Netflix and watch the three seasons before Summer 2014 rolls around. You’ll be glad you did. I promise.